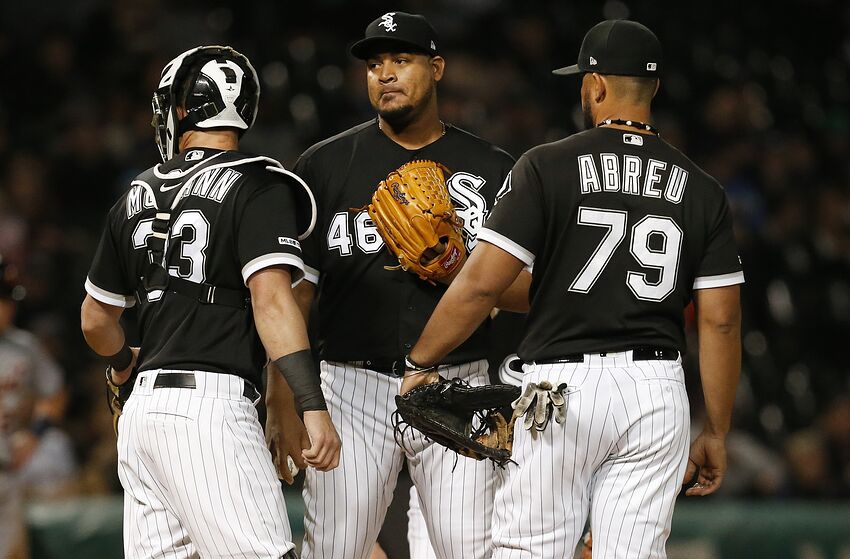 CHICAGO, ILLINOIS - SEPTEMBER 28: (L-R) James McCann #33 of the Chicago White Sox, Ivan Nova #46, and Jose Abreu #79 meet on the mound during the sixth inning of a game against the Detroit Tigers at Guaranteed Rate Field on September 28, 2019 in Chicago, Illinois. (Photo by Nuccio DiNuzzo/Getty Images)

The first full work week of 2020 is ending as I write this, and the Chicago White Sox spent the end of 2019 giving fans reasons to dream of spring, summer, and hopefully, late autumn.

Veteran stalwart Jose Abreu signed a new deal, and returning stars Tim Anderson, Eloy Jimenez, and Yoan Moncada round out what should be a stout lineup.

As a White Sox fan, I can’t recall the last time I was this excited in January. Perhaps in 2006, when Jim Thome arrived on the South Side? Even then, the departure of Aaron Rowand in trade made that bittersweet.

It’s true that nothing is decided on paper – we’re many months away from knowing if this White Sox team will be good, great, or a disappointment. Injuries or bad luck could derail the 2020 season. It’s also possible that the team will play well and continue its ascension, but still be a year away from postseason play.

White Sox fans know all too well that what looks good on the hot stove doesn’t always translate to a pretty presentation on the plate. We’ve seen this movie before, and the ending has been sad more times than not.

1d - Chicago White Sox: Paul Konerko is off the HoF ballot 1d - Once and for all: Did Shoeless Joe Jackson play to win in the 1919 Series? 2d - Chicago White Sox: Three outfielders that are still available 2d - White Sox: Could Nolan Arenado be an option right now? 2d - MLB Hall of Fame: Don't bet on the ineligible becoming eligible
More News at Southside Showdown

Consider that 2006 season I mentioned. The White Sox were looking to repeat as World Series champions. Thome got off to a good start in Chicago, helping to win a rain-delayed home opener with a bomb against the Cleveland Indians. He’d go on to have a pretty damn good year (42 homers, .288 BA), but that wasn’t enough to get the Sox to postseason play. They won 90 games, which is typically enough for a playoff berth (even before the recent playoff expansion) and still finished third in the division.

How about the next year? I was excited that Darin Erstad had joined the team – I thought the aging veteran could add a spark. But he put up mediocre numbers after getting a home run in his first Sox at-bat, and a spate of offseason deals that arguably leveraged the Sox’s present for the future may have further hurt the team. The team lost 90 games.

Aging superstar Ken Griffey Jr. joined the team in 2008, and while the Sox made the playoffs – just barely – he clearly had little gas left in the tank. A sterling defensive play from Griffey in game 163 did help the Sox reach the playoffs, but they were ousted in round one.

Other big names that were supposed to help the Sox but either flamed out or played well but were unable to lift the team? How about Adam Dunn? Austin LaRoche? Andruw Jones? Todd Frazier? I’m getting depressed.

So yeah, Sox fans have been bitten before. The good news is that most of the players acquired this offseason are still in their primes, or close to it. Age is a bit of a concern with Encarnacion, but he’s slated to DH, so that shouldn’t mean too much.

It also helps that there appears to be a plan in place, other than just going after high-priced big names.

I wasn’t even this excited after the promising 2004 season. I expected the 2005 team to be good, but it didn’t appear to be a World Series winner on paper. But lighting can be caught in a bottle – metaphorically speaking, don’t try it at home – and the team got hot (especially the pitching) during a magical playoff run. Perhaps a little lucky, too – who knows how differently things turn out if A.J. Pierzynski doesn’t run out that controversial dropped third strike against Anaheim.

Not that I’m printing playoff tickets just yet. But with weak competition in the American League Central division, the 2020 Chicago White Sox could be ready to compete. Best of all, the talent is young enough that the window feels wide open.

I still have White Sox fan dread. The team could win 10 championships in a row and that dread would never fade. That said, the dread is less oppressive this year. I have hope, for the first time in many years, and that’s all I can ask for.