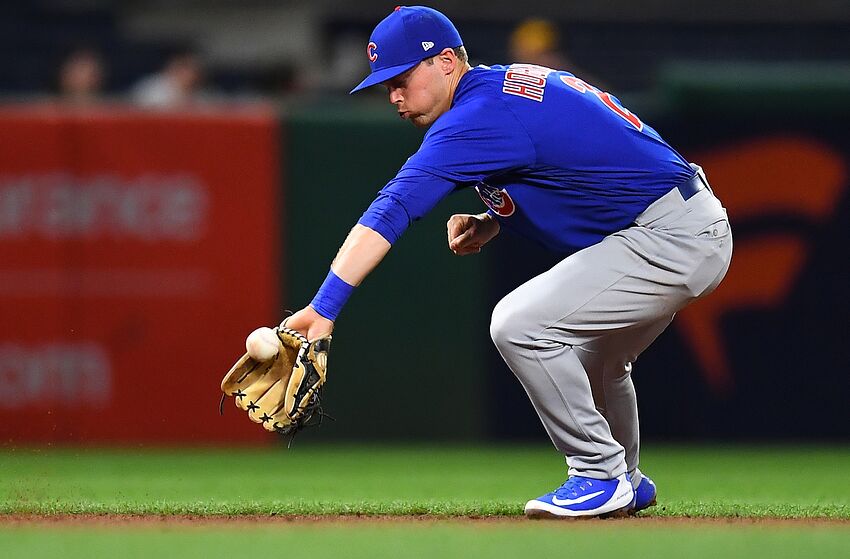 Blackhawks: Boston Bruins are the biggest challenge Chicago will face by Vincent Parise
White Sox: What’s next after missing out on Zack Wheeler? by Colton Thomas

Nico Hoerner impressed in limited action with the Chicago Cubs last season, but was it enough to lock down the second base position?

While the Chicago Cubs will look to improve the outfield – and are reportedly still interested in bringing Nick Castellanos back – the competition for second base appears to be wide open. Especially with Addison Russell no longer a member of the Cubs organization and Ben Zobrist either departing via free agency or retirement. Last offseason, Theo Epstein brought in Daniel Descalso to provide support beyond 2019 while giving the team a resourceful veteran bat off the bench.

But Descalso hit just .173 and spent roughly half of the year on the injured list. He’s under contract through at least next season with a $3.5 million club option for 2021. The 33-year-old recorded a .980 fielding percentage in 301.2 innings at second and has consistently been below league average in defensive runs saved. I don’t expect him to play a critical role next year either, so the Cubs will need to determine who is going to see regular playing time at second base going forward.

Bote was inked to a five-year extension early last year and figures to take over the Ben Zobrist utility role going forward, albeit he primarily will be playing second or third. At second, Bote logged a .971 fielding percentage with four errors in 270.2 innings and was responsible for four defensive runs saved in 2019. He’s a very streaky player at the plate, recording 127, 106, 214 wRC+ in April, May, and August, respectively, but disappeared in June and July. The Cubs can live with Bote’s defense at second base, but he ultimately needs to produce over a full season.

Garcia’s journey to the Major Leagues is a pretty unique one and was raking in the minors before being called up in early July. The 26-year-old smacked 27 home runs with 78 RBI in both Triple-A and Double-A but struggled to find his way in the big leagues. He batted just .220 in 19 games in July and logged a concerning .927 fielding percentage at second base in a 118.1 inning sample size. It will be interesting to see if the Cubs bring him back next year as he’s shown the potential to provide some incredible pop in the minors.

The Cubs acquired Kemp at the trade deadline last year, and the speedy 28-year-old showed the second-best range at the position, next to Russell. Although not a large sample size, he recorded a .980 fielding percentage in 92.0 innings. Over three seasons, he has a .986 fielding percentage at second base and has committed just two errors during that span. The problem is that – outside of the 2018 season – Kemp has never shown the ability to hit for average. He’s brief time with the Cubs last year saw him bat just .183 in 44 games, and it would appear that he may potentially thrive as a bench player.

Everyone is familiar with Happ’s 2019 season that saw him spend most of it down in Triple-A figuring out his timing to cut down on strikeouts. He rejoined the Cubs at the end of July and put together a quality stretch of games, in which he hit .264 with 11 home runs and 30 RBI (126 OPS+). While that offense was good to see, his defense at second base left a lot to be desired with a .970 fielding percentage and had the worst range of qualified second baseman on the team. If Happ has hopes of making the team next year, it’s going to be in centerfield.

The Cubs top prospect was called up in September out of necessity after both Russell and Javier Baez landed on the injured list. In a 20-game sample size, Hoerner hit .282 with three home runs and 17 RBI (88 OPS+). He played just one game at second base last season for the big league club but recorded a .982 fielding percentage in 124.0 innings for Double-A Tennessee. He doesn’t have the best range at the position but has a better fielding percentage at second than his natural position at shortstop.

Next: Team needs to have short leash on Albert Almora

The Cubs may start Hoerner down at Triple-A to start the year, which would likely open the door for David Bote or Tony Kemp. Without help from outside the organization, it looks like it’s eventually going to be Nico Hoerner’s job to lose.