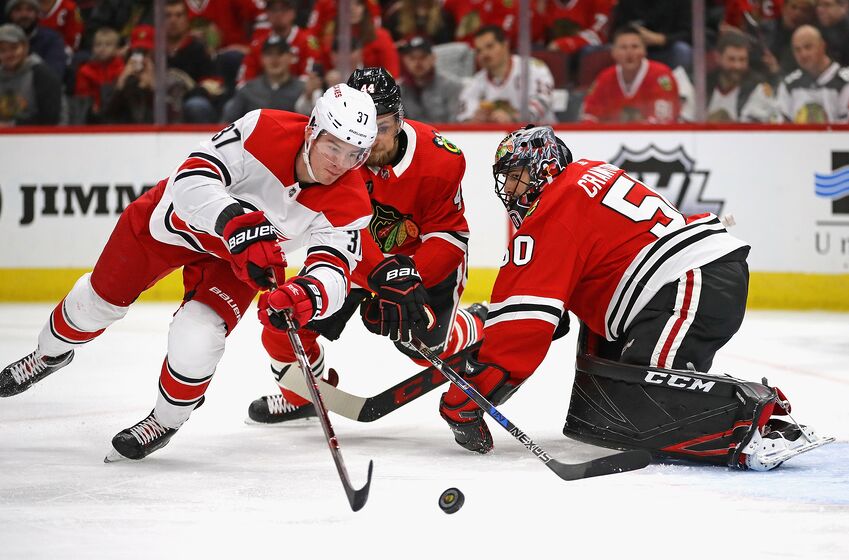 CHICAGO, IL - NOVEMBER 08: Andrei Svechnikov #37 of the Carolina Hurricanes pushes the puck past Corey Crawford #50 of the Chicago Blackhawks to score a first period goal at the United Center on November 8, 2018 in Chicago, Illinois. (Photo by Jonathan Daniel/Getty Images)

Bears: Matt Nagy appears to be in over his head by Patrick Sheldon
Bears: Khalil Mack has been way too quiet this season by Ryan Fedrau

The Chicago Blackhawks are winners of four in a row. They now have a chance to make it five against a team that made them look silly earlier this year.

Here we are a few weeks later and the Blackhawks have been playing much better. The Hurricanes would be wise to gameplan for a completely different team this time around. Since then, they have changed their line combinations and the way they play the game. That team three weeks ago was playing a dump and chase, man coverage team. Now, they should expect a zone team that has relied upon its breakouts to win.

They were lucky to catch that version of the Blackhawks and they took advantage by shutting them out. Now, they could only hope to limit the number of goals instead of shutting them out again. Patrick Kane may have benefited from this change more than any player on the team. He is as good as ever right now so the Hurricanes better be ready. If Kane is feeling it like he has been during his current nine-game point streak, they have a great chance to win.

The Blackhawks have had solid goaltending during their little run as well. It has not yet been said who will start between Corey Crawford and Robin Lehner but it doesn’t really matter. They have both been really good so it is clear they trust both to get the job done. Crawford started on Sunday night against the Buffalo Sabres so it is fair to assume that Lehner will get this assignment.

Related Story: Blackhawks continue to win as they have a great weekend

The Hurricanes present a really good defense with guys like Dougie Hamilton, Jake Gardiner, Joel Edmundson, and Jaccob Slavin. They also have a few studs who can score goals upfront like Teuvo Teravainen, Sebastian Aho, Andrei Svechnikov, and Erik Haula. At 12-7-1, there is no doubt they are a great team and a solid test for the Blackhawks. If they can play their game the right way they will lock up their fifth in a row and could potentially be in a playoff spot by the end of the night.