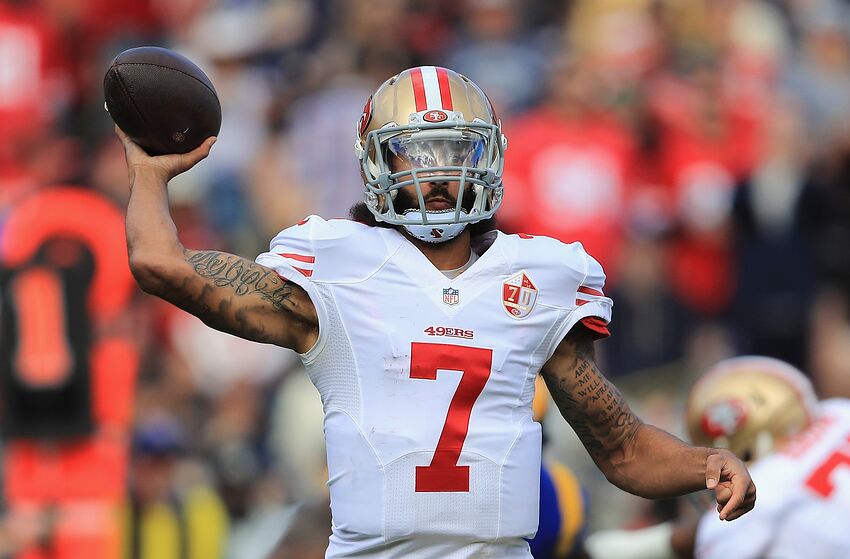 LOS ANGELES, CA - DECEMBER 24: Colin Kaepernick #7 of the San Francisco 49ers throws a pass during the first half against the Los Angeles Rams at Los Angeles Memorial Coliseum on December 24, 2016 in Los Angeles, California. (Photo by Sean M. Haffey/Getty Images)

Blackhawks vs Predators: 3 must watch players tonight by Colton Thomas
Bears: Beating the Rams would go a long way for Chicago by Vincent Parise

The Chicago Bears offense has had its struggles during the first nine games this season. A change at quarterback this late in the season is a bad idea, and so is signing Colin Kaepernick.

During Colin Kaepernick‘s short career in the NFL, he hasn’t been as good as people think he was. Kaepernick played well in relief for Alex Smith back in 2012. Kaepernick then went on to have a successful 2013 season. After 2013 he was silent, is he really worth the risk for the Chicago Bears?

Both of those seasons ended on plays where Kaepernick couldn’t put the ball in the end zone on the last play. After the 2013 season, where his 49ers lost in the NFC Championship, his play started to shift.

After throwing an interception to Malcolm Smith in the NFC Championship Game, Kaepernick totally fell apart. The 49ers went from 21-8 with Kaepernick as their quarterback (including playoffs) to missing the playoffs entirely in 2014.

Kaepernick’s first 29 games as a starter weren’t as great as people want to remember them to be. Yes, he had a winning record but he also had one of the best defenses since the turn of the century. Kaepernick threw for 28 touchdowns and 13 interceptions in 29 games. When he was at his “best”, he still was under a touchdown a game.

Kaepernick played all 16 games in 2014 and took the team to an 8-8 record. That season he threw for 19 touchdowns and 10 interceptions. Just over a touchdown a game but you have to take garbage time into consideration.

He didn’t shock the NFL with his play. He wasted a great defense with poor offensive play. Kaepernick even got Jim Harbaugh fired. Harbaugh was arguably their best coach since Bill Walsh.

Between 2015 and 2016, Kaepernick played his last 19 NFL games. During those two seasons, he won only three games. Kaepernick was 3-16 with the worst stats among NFL starters. He threw 22 touchdowns and 9 interceptions, averaging only 177 yards per game. Another example of garbage time inflating his stats in touchdowns.

Kaepernick would end his career with a 32-32 record, 79 touchdowns, and 37 interceptions (including playoffs). In 2016, he wasn’t good enough to finish the season. At this point, Kaepernick is 32, he has a bad shoulder and is a locker room divider. I do not see the reason why NFL fans call for Kaepernick whenever they see another quarterback playing as bad as he did.

Right now, there are around 10-15 backups that are better quarterbacks statically than Colin Kaepernick. A lot of people are blinded to the fact that he just isn’t worth it. Whether you believe he was blackballed by the NFL or not, he isn’t worth the baggage. The Bears’ locker room does not need someone to disrupt the culture. Kaepernick is a divider that doesn’t have the talent to be an NFL starting quarterback.

Next: Win against Lions shows why you shouldn't give up on Trubisky

So the question becomes, would you rather keep Mitchell Trubisky, who still has the potential to turn it around? Or take a 32-year-old quarterback who will divide your locker room? The choice is very clear. Trubisky is the obvious answer.